Wonderful examples of Baroque Ligurian who have the ability to charm whoever the entrance gates. Paintings, altars, baptismal fonts, arches, aisles formed by the skill and ingenuity of skilled hands. In all Valprino these oases of peace are innumerable, more or less known; and not only churches but also speakers, votive pillars, remnants of chapels. The silence, the breeze caresses the face, the pace at times interrupted only by the trampling of olive branches can trasformmare a simple walk in a real pathway to know and rediscover stessi.Una most important churches and majestic is that of San Giovanni del Groppo in the square of grass in Prelà, dating from the fifteenth century, with three naves divided by stone columns that support pointed arches. Inside are paintings by important artists such as Casanova and Bruno.

One of the most intense calls the entire Valley. Perfectly preserved, enclosed between the arches, stones and pebbles all the history of the territory in which they have been for centuries the only way of communication among the many villages. Even today, they have a timeless appeal because their structure is in perfect harmony with the environment around them. 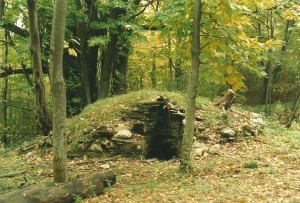 Presumably the only intact throughout Liguria. Dating back to the seventeenth century, like the outside of the “box” (the hut used by shepherds), it spreads all underground. Its interior fact is shaped icebergs and a spiral staircase, adhering to the inner walls, dry stone, allows you to get up to 10-15 meters deep. The ice house was used to accumulate during the winter snow that turned to ice, was cut into blocks, then sold in the summer. You can get along, for half an hour, the road that runs alongside the Cemetery of Villatalla. 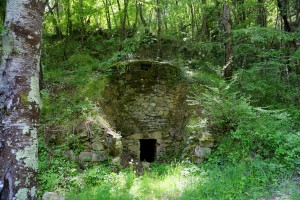 It was built in the late 1800s but was used sparingly. To get the lime was essential to keep the fire burning in it for at least two or three days and three nights. The stones had to heat up to the point of pulverize once cooled. The process / production was particularly challenging. The brazier alternated in fact 2, 3 men. The Calcinaia is divided into two floors. In the lower one was thrown wood while in the upper one the stones from which it was extracted and lime.

Referred to as “the Nativity of the Snake”, produced by maestro Giuseppe Ascheri, participated in the International exhibition of Nativity scenes in Verona. The historic landscape – classic plays on sfonfo the fortress of Herod, in the background of the Bedouin camps in the foreground the Nativity. All stattue come from Sicily. Why nativity Snake? Why near the Nativity it is played with a snake’s head leaning towards the Child Jesus to symbolize the original sin and the Male.Il crib is located at a dozen meters from the parish SS Annunziata.

One of the first countries to adopt the hinterland thanks to the Brotherhood of the Holy Cross, an aqueduct (which are still visible traces) that through channels of lead in 1715 brought water from the source of the Chapel of Chestnut in the three fountains.